As a follow up to In the context of quantum entanglement and teleportation – Stargate may be more correct than Star Trek, I’m diving into one of SciFi’s persistent quandaries – time travel.  And before anyone gets started, I am a proud Trekkie so this is not meant as a knock on Star Trek.  In fact, I’ve already purchased my tickets for Star Trek Into Darkness and as fan of BBC’s Sherlock, I have to admit I’m sort of rooting for the villain this time around!

The Illusion of Time

Just like the previously mentioned post, the amazing PBS Series The Fabric of the Cosmos by Brian Greene has gotten the my SciFi dork hat on – specifically the episode The Illusion of Time. 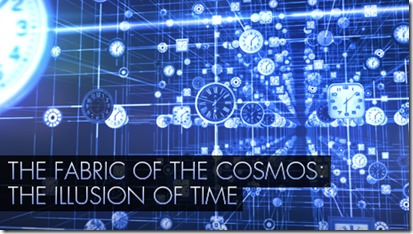 The basic tenets of concern here are:

– Time is a far more complicated concept than we originally realized and it was Albert Einstein that devised the basic building blocks.

– The key concept is that space and time are not separate constructs, just like scifi parlance it is in fact the space-time fabric.

– Because of this, the distance (i.e. space) and gravity have a sizeable impact on time.  If A is a far distance from B, the direction A effects the time they see B – i.e. observing B’s past or future.

– Therefore, time itself is not a fundamental construct but it is a personal one – time runs at different speeds based on the observer.

– While time seems to go in one direction, there is nothing in the laws of physics that prevents one from going backward as time is really an illusion

– The arrow of time (our concept of going forward in time) is perhaps an artifact of entropy (the universe’s tendency to go from order to disorder).  The beginning of time is that of the Big Bang which started this chain reaction of disorder that we observe today.

Back to Star Trek 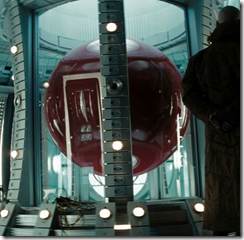 But even to accept artistic licensing about the difference of going through a black hole (compared to orbiting one), the black hole / gravitational pull construct is about going forward in time, not backwards in time.

If you follow the Stargate series, the ability to go from one location to another almost instantaneously was through the stable wormholes between two stargates.  As noted in my previous post, the idea of teleportation between two stargates would be their reliance on quantum entanglement.  The stargates themselves could be scanning mechanisms that allow one to control and contain entangled particles.  Upon their activation, it would then be possible to transmit a massive amount of information (i.e. the quantum state of the people and objects entering the portal) from one gate to the other.  But what is also interesting here is that there is nothing in physics that states that entangled particles have to actually be from the same time.  As noted time is just an illusion based on the arrow of time going from order to disorder.

The concept is not as far-fetched as it may seem:

– Wormholes as Time Machines calls out that it may be theoretically possible to use worm holes as time machines (albeit in this case, it would be achieved by having one end of the wormhole sped up to the speed of light)

Nevertheless, at least within the context of quantum entanglement, it appears that both time travel and teleportation, Stargate is more correct than Star Trek.

As Q said to Captain Picard in All Good Things:

For that one fraction of a second, you were open to options you had never considered. *That* is the exploration that awaits you. Not mapping stars and studying nebulae, but charting the unknown possibilities of existence.

As enjoyable as it was to go through the mental exercise of quantum entanglement and time travel, I still have to give one more shout out to Star Trek (especially the above quote) as it was the reason as a kid I had wanted to become an astronaut.  And with that segue, a special shout out to Commander Hadfield’s awesome rendition to David Bowie’s Space Oddity.